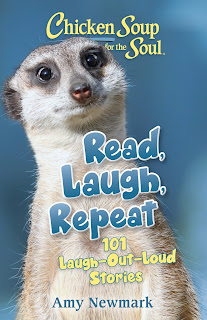 I had surgery on my right hand a few weeks ago and it’s still in a cast. Consequently, it’s been hard to write / type lately. Because of this, I have not posted any new blog posts and this one is going to be short. But I did want to let you know that a story I wrote will appear in the soon to be released Chicken Soup book titled, “Read, Laugh, Repeat”. This is a book of previously published humorous stories. I’m honored to have had one of mine chosen.

My husband and I will attend the Selah Awards Banquet on June 3rd. I’m so looking forward to that! And I’ll be teaching a workshop on memoir writing at the KCWC in June. More on both of those later. 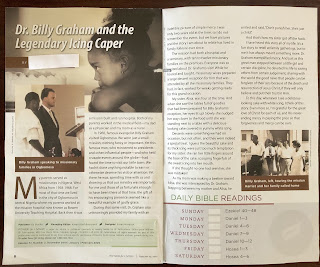 This morning I learned that pieces I wrote have been selected as finalists in two different categories in the Selah Awards writing competition. An article that was published in “Power for Living” last year is a finalist in the published article category and A Stand for Truth was selected as a finalist in the nonfiction book category. The winners will be announced June 3rd at the Blueridge Christian Writers Conference at Ridgecrest, NC. I’m humbled and honored beyond words. (The picture is the article that finaled.)

Posted by Harriet E. Michael at 2:01 PM No comments: 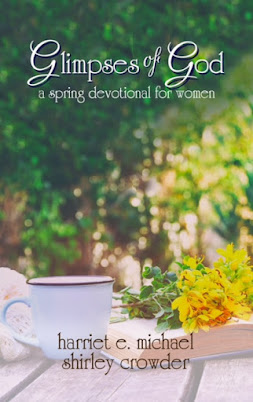 Cover Reveal! Here is the cover of the third part of the year around "Glimpses" devotional series co-written by Shirley Crowder and me. I'm so excited to show it to you and for you! It is releasing next month. Stay tuned. I'll post the link to it when it is available ... sometime in March. 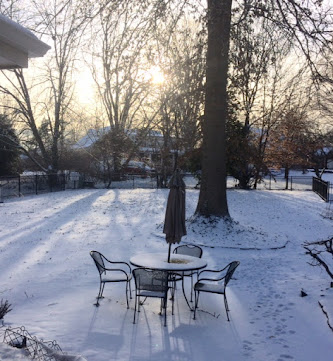 A new year has dawned. I know we're all thankful 2020 has moved on and given way to a new year. I, like most of you, am praying this year brings good surprises and not bad ones. For starters, I pray this year brings a decrease in the Covid virus, so that cases, hospitalizations, and especially deaths drop significantly and we can get back to a more normal life that might even include the ability to travel again. This virus wrecked havoc among my family and friends like I'm sure it has many of you. My older sister's entire family caught it last spring but none needed hospitalization, my brother and father caught it in the summer and both ended up hospitalized. We thought we were going to lose my then 91 year old dad but by God's grace he pulled through. A friend from my college days was not as lucky. She lost her son to the virus in the summer. And the virus rages on still. *sigh*

So yes, that is my number one hope and prayer for 2021. I have many writing things to keep me busy and to look forward to in the coming year. Here are some of them:

My first devotional assignment for "The Quiet Hour" published by David C. Cook is included in their current winter issue and I have another coming out in an issue later this year. I just submitted my third seven-day assignment for them that will be in their summer '22 issue. I am a regular with them now and love it! I also have individual devotions in the winter and upcoming spring issues of "The Secret Place".

I will have two new books releasing this year--one in the spring and one in the fall. They are the last two books in the year-long Glimpses of God series. As soon as I have the spring cover, I’ll share it with you.

And I will be teaching two workshops at the MidSouth Christian Writers Conference March 19-20. It will be all online this year. I encourage you to sign up if you are a writer or interested in becoming one. My workshops will cover devotional writing as well as freelance writing.

In addition to these activities that I know of I'm sure more will pop up during the year. I am constantly writing and submitting things. Right now I have several partial books on my computer that I write on pretty consistently (switching from one to the other), I stay active with a couple of local writing groups, I have a few friends I mentor in some way or another, and I write and submit freelance articles, stories, and devotions regularly.

Oh, and one more thing. The kindle version of my husband's memoir, A Stand for Truth that I co-wrote will go on sale in a week or two in honor of its one-year release anniversary. Stay tuned for that!

Posted by Harriet E. Michael at 1:12 PM No comments:

This devotion I wrote appeared in "Power for Living" last Christmas. (The picture is from a Christmas pageant at the boarding school in Nigeria when I was only about five years old.)

‘Twas the Night before Christmas

“But you, Bethlehem Ephrathah, though you are small among the clans of Judah, out of you will come for me one who will be ruler over Israel, whose origins are from ancient times.” Micah 5:2 (NIV)

‘Twas the night before Christmas and all through the world, the people continued as they always had with no idea of the event—the advent—that would happen the next day. In the streets of Jerusalem, the people did not think they needed a new king. They served Caesar and he was the most powerful man on earth. The people did not think they needed a savior. They obeyed the Roman laws and were not in trouble that they needed saving from, as far as they knew. And the people in Jerusalem and elsewhere could care less what was happening in an obscure little town called Bethlehem.

But what happened in that little town the next day changed the trajectory of history. For in that obscure place, the next day, Jesus, God’s own Son, came into the world as a tiny baby.

The ancient prophet, Micah knew what a special place Bethlehem was to be in history. He foretold it so many years earlier when he said out of this little obscure town will come one who will be the ruler of the world. We read this in Micah 5:2 which says, “But you, Bethlehem Ephrathah, though you are small among the clans of Judah, out of you will come for me one who will be ruler over Israel, whose origins are from of old, from ancient times."

Thinking of those people so long ago who completely missed what God was doing in their time, causes me to wonder what we may be missing today. Certainly, we are not missing the birth of Christ but are there other, smaller ways God is working that you and I and the rest of our world are too busy and too preoccupied to notice? According to our focus passage in Job, God performs wonders that cannot be fathomed!

Prayer: Gracious Heavenly Father, open our eyes to see your marvelous works. Open our hearts to be sensitive to your Spirit’s prodding. Open our minds to knowledge through your word. I pray we do not miss the great works you are doing in our world and in our lives. In Your Son’s Name, Amen.

Thought for the Day: ‘Twas the night before Christmas and all through the world, the people of God were … 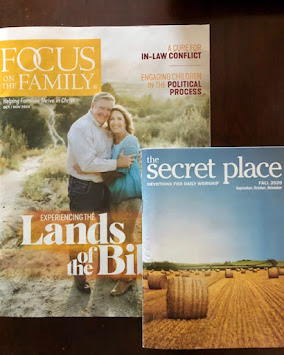 Fall is here and winter is closing in. Time has a way of flying by. This is the one year we may all be happy to see time go by, though. Here's to hoping 2021 brings a cure / vaccine for Covid and many other blessings!

Though I have penned many books the past few years, I still enjoy freelance writing. One of the perks of freelancing is that along with payment, most magazines also send complimentary copies of any magazine I have contributed to. Currently,  have a devotion in the fall issue of "The Secret Place" and an article in the "Focus on the Family Magazine". I also received notice that "The Secret Place" will carry another of my devotions in their upcoming winter issue.

And ... some exciting news on the book front. In August, my co-writer, Shirley Crowder, and I (in agreement with our publisher) decided to list one of our devotional books "Glimpses of Prayer" as a permafree--meaning it is permanently free on Kindle. Authors who have several books sometimes do this for promotional reasons. It has worked! This week it shot up in number of downloads on Amazon and a few days ago it hit #1 in two catagories--books on Christian prayer and Christian devotional books. Woohoo! (It has stayed there for several days, though I fully expect it to move down in time.)

Writing is so much fun for me! It's a gift God gave me and I feel like a child who loves taking out my gift and playing with it everyday!

Posted by Harriet E. Michael at 8:31 AM No comments:

Book Signing in a Pandemic 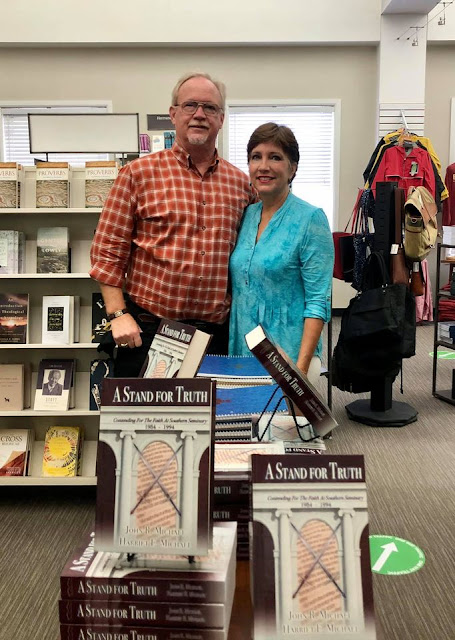 Southern Seminary is excited about our book! The bookstore there has purchased a lot of copies from the distributor and is not only carrying them in the bookstore, they are spotlighting them! They had talked with us about holding an event where we come and meet the students and sign books as they were purchased but due to Covid restrictions, they have decided to wait on that event until next spring. Instead they sent a box of books home with John for us to sign and they are spotlighting these books both in their store and online. We are so excited to see their enthusiasm for our book!
The picture is of us today when we brought in the box of signed books. Little did we know they had bought another box for us to take home and sign! 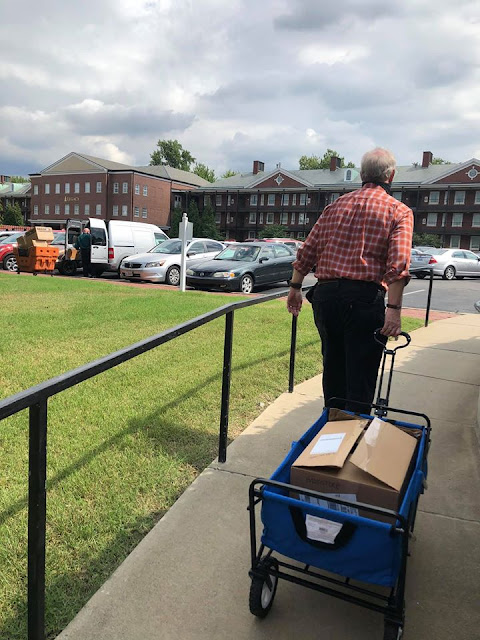